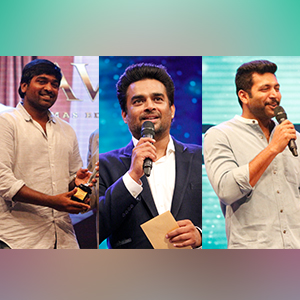 Pink ads presented 3rd Annual TEA awards (Thomas Edison Advertisement Awards), a citation that salutes the ad industry that goes unnoticed. The awards are encapsulated and titled after Thomas J Barott who fabricated the concept of ad to the unified world. The TEA awards aims to embolden, hearten and compliment the long-haul, the push and the expertise that goes into accomplishing a sweep and making congregation halt and observe the ads which has always been a crucial and tedious work to ad directors. This tremendous event happened in Sir Mutha Venkathasubba rao concert hall where the alluring heroines, stunning hero’s and many othercelebrities walked into red carpet. The grandeur event that began with contemporary dance programme and fashion parade with gorgeous models walking in ramp sending audience in aww.

The prestigious awards felicitated prestigious institutions like tanjara, Arun Excello, GRT, 999, MisterWhite, Alaya, Pothys and many others. While the felicitated Brand Ambassador for the product included actors such as Madhavan for Arun Excello, Jeyam Ravi for Alaya Vesti, Vijay Sethupathy for Minister White, Kalidas Jeyaram for Dairy milk bubbly, and many others while the actress included alluring ladies like Srushti for GRT gold flexi plans, Asna zaveri for GRT, Divya darshini for Gold winner and many others. The stage also felicitated directors and product builders for their efforts, creativityand hard work that went into making award. The audience who enjoyed array of colourful programmes said that Ads don’t capture minds as they are short and fade away soon, but if an ad captures viewer’s attention in a minute it means a lot. And all this hardwork goes unnoticed. Felicitating such rare honour is unique and great. “