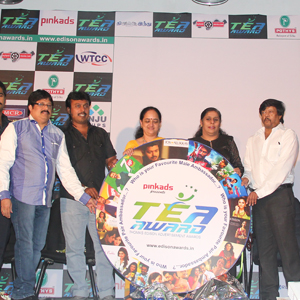 The most celebrated 2nd Edition TEA AWARDS nomination announcement was held at MOP Vaishnava College in Chennai. The event witnessed the coming together of some of the best celebrities from Tamil film fraternity that includes Ashok, Kayal fame Chandran, Vincent Ashokan, Aadhavan, Producer-Director Thyagarajan, filmmaker Vijay Chander and many others.

The entire auditorium turned crazy with the announcement of three categories of awards that includes – Best Male, Female and Pair…

Speaking on the occasion, famous TV anchor turned actor Jagan says, “Advertisement has been getting the red carpets spread out all the time in India, but this is the first ever time, Tamil film industry has been taking it in own hands for felicitating the best talents.” Adding more humour as an intriguing part of all his speeches, he said, “If not for advertisement, we would have never known that Amitabh Bachchan looks like Sivaji Ganesan,” and continued to add that we have all seen Vijay as an action packed hero, but this Jos Alukkas features him in an emotional dimension and guys are ready to get the slipper hit as Samantha herself has become its ambassador.

Actor Ashok on his part acclaimed, “Making an advertisement is a much complicated than making a film. In my film Vaalu, there was a statement regarding advertisement and yes it’s really a great thing that involves creativity and hard work.”

Actor Chandran of Kayal fame uttered, “When it comes to advertisement, the significance has to be conveyed in just 30 seconds. I am always in awe of filmmaker Balki, who has produced so much of advertisements. When Cadburys had a brand crisis before 10-15 years, the brand promoters didn’t want to create an issue, but managed to pull Amitabh Bachchan into it, the chocolate soon became so much acquainted in everyone’s life. Such is the importance of brand ambassadorship.”

Actor Thaman on his turn added, “The real complex thing of advertisement is that even a minute mistake will become so much blatant. But it’s not the same with films as you wouldn’t be able to notice it vividly. Every single frame in the advertisement matters a lot and such is the hard work that everyone involved in the making have to keep exerting.”

The much acclaimed Apsara said, “I happened to see an advertisement based on the transgender and it’s a new way to see our sisters. I hope the younger generation would treat everyone in holistic manner.”
TV anchor-actor Aadhavan cheered up the crowd with hilarious speech by mimicking some of the yesteryear commercials. “The advertisement might have a running length of just 30 seconds, but it will take at least 10 days for the shoot to be completed.”

Music director Nivas K Prasanna crooned his best mellifluous track ‘Vinmeen’ from his film Thegidi that made the girls go crazy over his voice.
Actor Ashok Selvan on his part claimed, “Firstly, it’s such a great honour to see that MOP students have done a remarkable job in delineating transgender with a greater light. Everyone has been looking down on them and such great efforts of making beautiful advertisements will surely bring a great change in the society.”

Producer Thyagarajan came up with a great speech of encouraging girls from MOP Vaishnava College of motivating them to make something more creative and useful to the society. He also requested the principal of the college to improvise the digital and editing facilities to promote more good works.
Mrs. Chitra Devi, Malaysian Embassy Consulate General appreciated the young girls of the college for having taken special efforts to promote the social awareness issues. She extended her speech of congratulating the entire Tamil Nadu for offering sweet experience with their kind gesture and good support.
Mr. Selvakumar of Edison and TEA Awards played a perfect host of welcoming everyone and made an affirmative promise of promoting the talents from MOP college with the means of short films, documentary, ad films and full length feature film.

What made the event more scintillating is the special ad films made by MOP college students based on transgender, rape victims, usage of plastic and many more social awareness issues being screened. There will be a special category of advertisements made by the students during the awards ceremony.

The event concluded with the chief guests and special celebrities voting online for their favourite male, female and dyad ambassadors.