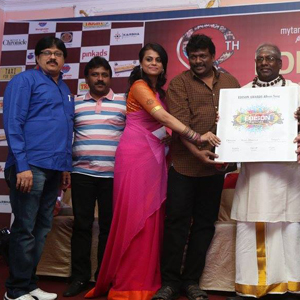 The greatest beauty of mankind is exploring the rarest pearls amidst deepest oceans. What adorns these beautiful pearls is its emblazonment. Cinema – The dream factory of enormous dreams enriched with passion stands out as lollapaloozas of such elegant words. Millions of pearls across the widespread panoramas and the rarest ones shine with guts and glory. Edison Awards over the span of seven years has been endeavouring with impeccable choice of celebrities and films to be honoured as a loyalty to their proficiencies.

Embarking on the 8th Annual Edison Awards, the nominees announcement last evening (January 7) amidst the ambience of aromatic flavours of colours and celebration. The occasion was sequined with vividness as the charm of humorous personalities like Parthiepan, Ramesh Kanna and many others from the film fraternity were present for the occasion.

Speaking on the occasion, the multi faceted personality of Tamil cinema, Ramesh Kanna says that it is a great pleasure to be a part of this occasion. "Everyone has now apparently forgotten the essence of Tamil cinema. They have advanced technically, but the narrative domain persistently needs a change. I am elated that My Tamil Movie Mr. Selvakumar has not left behind the father of cinema."

Parthiepan who spoke on his turn gladly said, “It’s a moment of glee to see that Tamil films are honoured with more genuineness,” and continued to announce the nominations for Best Director and Screenplay. Everyone were at peak of laughter after Parthiepan stressed his name in the nomination list of BEST SCREENPLAY and saying, “Hope you all know who the best screenwriter is?”

A special video album for Edison Awards featuring young talents was screened during the occasion that was studded with huge applause and appreciation.

Mr. Selvakumar played a perfect host of inviting the celebrities and rendered his vote of thanks for all.