EDISON AWARDS – AN ILLUSTRATION OF PASSION FOR CINEMA 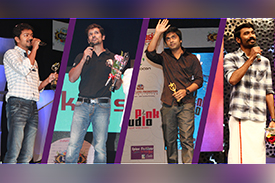 Awards have become a commonality these days for its variants found in plethora. The namesake accolades credited in favouritism has even become a spoiler of this tangible symbol of appreciation. But Edison Awards, a token of gratitude to the father of cinema – Thomas Alva Edison has occupied an immense prominence in the hearts of film personalities in the industry. Every award goes ennobled with a significant analysis of justifying the awardees for their respective achievements. Hosted in much grandeur and entertainment bonanza for the past years, Edison award is the most sought-after awards ceremony across nine countries now. From the ace personalities like Vijay, Dhanush and Vikram to the young league of technicians like Anirudh, everyone is so much inquisitive about their names being nominated for the Edison Awards.